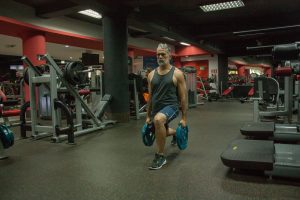 Could exercise help to prevent these unwanted side effects for older adults wanting to lose weight?

Obesity is often exacerbated by the age-related changes to physical function that lead to frailty. However, weight loss in older adults can be controversial due to the potential negative effects on bone mass and muscle mass. Bone mineral density (BMD) changes are of particular concern.

One potential solution is combining a weight loss intervention with regular exercise to protect against bone and muscle loss. But it’s unknown which form of exercise is best for supporting bone mineral density – aerobic or resistance exercise.

A 26-week randomised controlled trial was performed to explore the effects of aerobic, resistance or combined exercise during a weight loss intervention with obese older adults.

141 participants completed the trial. Participants were aged ≥65 years with a BMI ≥30 and a sedentary lifestyle. They had maintained a stable body weight for the previous 12 months, were on stable medication levels and had mild to moderate frailty.

Exclusion criteria included severe heart disease, impairments that prevented exercise training, diagnosis of dementia and significantly low BMD at the lumbar spine or proximal femur. Those who had used bone-affecting medications in the previous 12 months were also excluded.

Participants were randomised to one of 4 groups – aerobic, resistance, combination and control.

The control group did not participate in any weight management or exercise intervention. However, they did attend educational sessions about healthy diet choices during their monthly visits.

The weight-management program prescribed to the 3 intervention groups provided an energy deficit of 500-750kcal/day. This included weekly visits to a dietitian to help with dietary adjustments and behaviour therapy. The goal was to induce approximately 10% weight loss by the 6 month mark.

Aerobic exercise sessions included walking on a treadmill, stationary cycling and stair climbing. Participants began at 65% of peak heart rate, which gradually increased to 70% and 85% over time. Aerobic group participants had 60 minute sessions 3 times per week.

For those undertaking the combination intervention, the above exercises took place in combined sessions 3 times weekly that were 75-90 minutes long.

All participants were given supplements to ensure they met an intake of 1500mg/day of calcium and 1000IU of vitamin D/day.

The three intervention groups saw a significant decrease in body weight and fat mass compared to control. BMD and lean body mass had decreased less in the resistance and combination groups than the aerobic group.

There were some limitations noted. There was no assessment of bone quality, so it is possible that the interventions could have preserved or improved bone quality independent of BMD.

It was also a shorter duration study, which means the researchers were unable to assess the effect on falls and fractures.

Larger studies could further explore the effect of exercise on bone and muscle loss, including bone quality, fracture risk and differences between the sexes.

Driving Changes To The Obesogenic Environment

Should health be a personal or a public responsibility? It’s a question for the ages,…

Meal frequency is a highly debated topic in the world of weight loss research. Some…

Low-carbohydrate diets will often lead to weight loss over a short period of time. This…

What’s behind the urge to eat? Unpacking emotional and uncontrolled eating.

Researchers in Finland have established a connection between feeling burnt out at work, and eating…