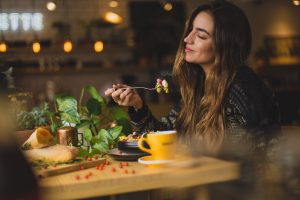 Initial weight loss is often only half the battle won. For many, the real struggle begins when it comes to preventing weight regain and maintaining a healthy weight.

Healthy habits around diet and physical activity are the cornerstones of maintaining a healthy weight. Although many people who are overweight or obese lose weight successfully, most will regain that weight over time.

Regaining weight may be partly due to behavioural regression, or shifts towards lifestyle habits that promote weight gain. But developing and maintaining healthy habits could help to counteract this regression.

An analysis of a randomised clinical trial was designed to identify the dietary and physical activity habits associated with 6 month and 24-month weight regain in participants of a weight loss maintenance trial.

The initial 24-month trial randomised adults with recent intentional weight loss of ≥5% into one of two intervention groups. Both groups received access to lifestyle tracking tools and education for the duration of the study. One group also received additional individual health coaching to support their efforts.

For the purpose of the analysis, these study groups were combined. Participants with follow-up data at 6 and 24 months were included in the analysis. In total, 194 participants were analysed.

Overall, participants maintained their weight loss at 6 months, but began to regain weight by 24 months.

The main factors associated with weight regain at both 6 and 24 months were more eating at restaurants, reduced fish consumption and less physical activity.

The researchers concluded that consuming less fish, fewer steps per day and more frequently eating at restaurants were the habits most consistently associated with weight regain.

Addressing these specific behaviours in those who have achieved weight loss may lead to a greater chance of long-term weight maintenance.

Some limitations were noted. Self-reporting of many habits may lead to biases. Some data regarding dietary habits could not be extracted from the surveys used. The participants were mostly female, white and educated, which limits the ability to generalise the findings to the greater population.

Obesity is one of the most significant health concerns of older adults, but weight loss…

Does A Good Night Sleep Make It Easier To Lose Weight?

Everyone knows that getting sufficient sleep is important for your general health and wellbeing. But…

The Link Between Weight Loss And Cognition

Two of the greatest strains on public health are obesity and cognitive disorders. There is…

People who are severely obese explain the reasons for weight gain

From their perspective: How do weight loss surgery candidates explain their histories of weight gain?…